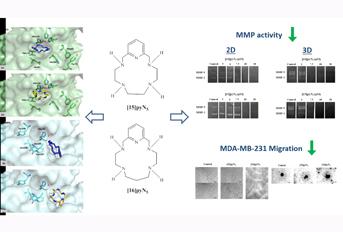 †These authors contributed equally to this work

The role of metalloproteinases (MMPs) on the migration and invasion of cancer cells has been correlated with tumor aggressiveness, namely with the up-regulation of MMP-2 and 9. Herein, two pyridine-containing macrocyclic compounds, [15]pyN5 and [16]pyN5, were synthesized, chemically characterized and evaluated as potential MMP inhibitors for breast cancer therapy using 3D and 2D cellular models. [15]pyN5 and [16]pyN5 (5-20 µM) showed a marked inhibition of MMPs activity (100% at concentrations ≥ 7.5 μM) when compared to ARP-100, a known MMP inhibitor. The inhibitory activity of [15]pyN5 and [16]pyN5 was further supported through in silico docking studies using Goldscore and ChemPLP scoring functions. Moreover, although no significant differences were observed in the invasion studies in the presence of all MMPs inhibitors, cell migration was significantly inhibited by both pyridine-containing macrocycles at concentrations above 5 μM in 2D cells (p < 0.05). In spheroids, the same effect was observed, but only with [16]pyN5 at 20 μM and ARP-100 at 40 μM. Overall, [15]pyN5 and [16]pyN5 led to impaired breast cancer cell migration and revealed to be potential inhibitors of MMPs 2 and 9.