The Role of Diet Related SCFAs in CRC Metabolism and Survival

The Role of Diet Related SCFAs in CRC Metabolism and Survival 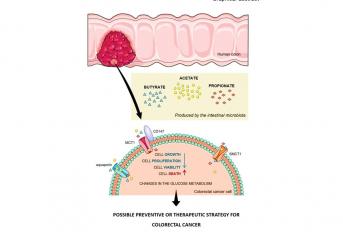 
Colorectal cancer (CRC) is a major cause of cancer-related death worldwide. CRC increased risk has been associated with alterations in the intestinal microbiota, with decreased production of short chain fatty acids (SCFAs). SCFAs produced in the human colon are the major products of bacterial fermentation of undigested dietary fiber and starch. While colonocytes use the three major SCFAs, namely acetate, propionate and butyrate, as energy sources, transformed CRC cells primarily undergo aerobic glycolysis. Compared to normal colonocytes, CRC cells exhibit increased sensitivity to SCFAs, thus indicating they play an important role in cell homeostasis. Manipulation of SCFA levels in the intestine, through changes in microbiota, has therefore emerged as a potential preventive/therapeutic strategy for CRC. Interest in understanding SCFAs mechanism of action in CRC cells has increased in the last years. Several SCFA transporters like SMCT-1, MCT-1 and aquaporins have been identified as the main transmembrane transporters in intestinal cells. Recently, it was shown that acetate promotes plasma membrane re-localization of MCT-1 and triggers changes in the glucose metabolism. SCFAs induce apoptotic cell death in CRC cells, and further mechanisms have been discovered, including the involvement of lysosomal membrane permeabilization, associated with mitochondria dysfunction and degradation. In this review, we will cover the current knowledge on the transport of SCFAs by CRC cells and their effects on CRC metabolism and survival. The impact of increasing SCFA production by manipulation of colon microbiota on the prevention/therapy of CRC will also be addressed.