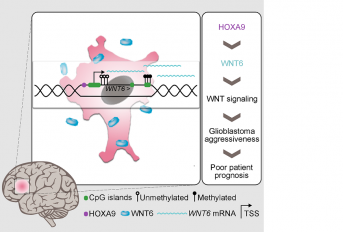 
Despite much effort to improve treatments, patients with malignant glioma still present a very poor prognosis that has not changed significantly in the last decades. In this context, it is crucial to better understand glioma pathogenesis to identify new molecular prognostic subgroups and therapeutic targets. WNT6 was recently identified as a new oncogenic molecule in GBM, with prognostic value in patients, but the mechanisms underlying WNT6 aberrant expression in glioma are still unknown. WNT6 was overexpressed in a subset of gliomas independently of IDH mutations, 1p/19q co-deletion status, and WNT6 gene copy number. Interestingly, WNT6 expression associated with the DNA methylation levels of particular CpG regions at both the WNT6 promoter and the gene body in glioma patient samples. HOXA9, a transcription factor previously associated with poorer clinical outcome in GBM, was identified as a novel transcriptional regulator of WNT6, activating the WNT/β-catenin pathway in vitro and in vivo. In various cohorts of glioma patients, mRNA levels of WNT6 and HOXA9 were significantly correlated, extending our in vitro and in vivo findings into the clinical setting. Interestingly, this novel molecular link between WNT6 and HOXA9 was not limited to glioma, as they were co-expressed also in patients with other tumor types. Clinically, WNT6 was a prognostic biomarker of shorter survival in GBM, independently of HOXA9 expression. Concomitant high-expression of both WNT6 and HOXA9 identified a subgroup of patients with particularly dismal survival. These findings describe novel WNT6 regulatory mechanisms in GBM, establishing particular DNA methylation patterns and HOXA9 as critical regulators of WNT6 expression in glioma. This HOXA9-WNT6 molecular link supports WNT signaling in GBM cells and is a powerful prognostic biomarker, highlighting the clinical relevance of this axis in patients. Novel therapies targeting WNT6/HOXA9 signaling may thus be useful for this deadly disease.