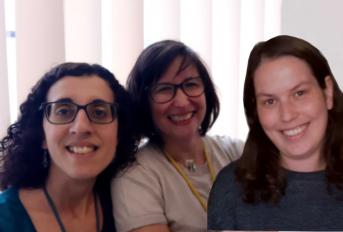 A significant proportion of patients with aggressive thyroid cancer fail to respond to radioiodide (RAI) therapy, the systemic treatment of choice for metastatic disease, and no effective alternative treatment exists. In other tumors, such as breast cancers, where the possibility of using RAI as a coadjuvant/neoadjuvant treatment would be an attractive therapeutic option, uptake is insufficient. The sodium iodide symporter (NIS) is responsible for thyroidal and mammary iodide uptake and deficient uptake of iodide  is related to defects  in the functional expression of NIS. Thus, the development of therapeutic strategies directed to the expression and regulation of NIS are clinically relevant. Transcriptional and post-transcriptional regulation of NIS expression involves different molecular players and signaling pathways that are also implicated in tumor progression and aggressiveness. NF-κB family of transcription factors is responsible for regulating many cellular processes such as inflammatory responses, cellular growth and cell death, and has been also implicated in cancer development. In the present study, we addressed the impact of the NF-κB signaling on NIS expression. Our data support that the activation of the canonical NF-κB pathway by Tumor necrosis factor-alpha (TNF-alpha), a pro-inflammatory cytokine shown to play a pro-tumorigenic role in tumor microenvironment, is involved in NIS downregulation. This work thus contributes to the understanding of the mechanisms underlying NIS functional expression, which may allow the identification of regulatory events that can be pharmacological targeted to enhance iodide uptake efficiency and improve the response to RAI therapy.

¶ These authors contributed equally to this work.

The sodium-iodide symporter (NIS) mediates transport of iodide across the basolateral membrane of thyroid cells. NIS expression in thyroid cancer (TC) cells allows the use of radioactive iodine (RAI) as a diagnostic and therapeutic tool, being RAI therapy the systemic treatment of choice for metastatic disease.  Still, a significant proportion of patients with advanced TC lose the ability to respond to RAI therapy and no effective alternative therapies are available. Defective NIS expression is the main reason for impaired iodide uptake in TC and NIS downregulation has been associated with several pathways linked to malignant transformation.

NF-κB signaling is one of the pathways associated with TC. Interestingly, NIS expression can be negatively regulated by TNF-α, a bona fide activator of NF-κB with a central role in thyroid autoimmunity. This prompted us to clarify NF-kB's role in this process. We confirmed that TNF-α leads to downregulation of TSH-induced NIS expression in non-neoplastic thyroid follicular cell-derived models. Notably, a similar effect was observed when NF-κB activation was triggered independently of ligand-receptor specificity, using phorbol-myristate-acetate (PMA). TNF-α and PMA downregulation of NIS expression was reverted when NF-κB-dependent transcription was blocked, demonstrating the requirement for NF-kB activity. Additionally, TNF-α and PMA were shown to have a negative impact on TSH-induced iodide uptake, consistent with the observed transcriptional downregulation of NIS. Our data support the involvement of NF-κB-directed transcription in the modulation of NIS expression, where up- or down-regulation of NIS depends on the combined output to NF-κB of several converging pathways. A better understanding of the mechanisms underlying NIS expression in the context of normal thyroid physiology may guide the development of pharmacological strategies to increase the efficiency of iodide uptake. Such strategies would be extremely useful in improving the response to RAI therapy in refractory-TC.