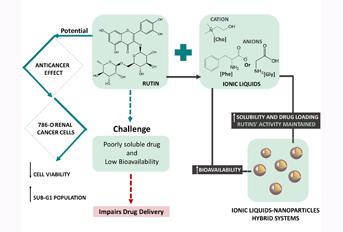 Rutin is a bioflavonoid widely found in nature that has shown several promising pharmacological properties, including antitumor activity. However, the low solubility of this compound remains one of the limiting factors of its applicability. In the published article “Anticancer Activity of Rutin and Its Combination with Ionic Liquids on Renal Cells”, the antitumor activity of rutin was demonstrated in 786-O cells, an in vitro model of human renal carcinoma, in which this activity had not yet been studied. Additionally, it was observed that the combination of rutin with ionic liquids (IL) significantly increased its solubility and incorporation in hybrid systems of IL-Nanoparticles, while maintaining the antitumor activity.

† These authors contributed equally to this work

The renal cell carcinoma (RCC) is the most common type of kidney cancer. Identifying novel and more effective therapies, while minimizing toxicity, continues to be fundamental in curtailing RCC. Rutin, a bioflavonoid widely found in nature, has shown promising anticancer properties, but with limited applicability due to its poor water solubility and pharmacokinetics. Thus, the potential anticancer effects of rutin toward a human renal cancer cell line (786-O), while considering its safety in Vero kidney cells, was assessed, as well as the applicability of ionic liquids (ILs) to improve drug delivery. Rutin (up to 50 µM) did not show relevant cytotoxic effects in Vero cells. However, in 786-O cells, a significant decrease in cell viability was already observed at 50 µM. Moreover, exposure to rutin caused a significant increase in the sub-G1 population of 786-O cells, reinforcing the possible anticancer activity of this biomolecule. Two choline-amino acid ILs, at non-toxic concentrations, enhanced rutin’s solubility/loading while allowing the maintenance of rutin’s anticancer effects. Globally, our findings suggest that rutin may have a beneficial impact against RCC and that its combination with ILs ensures that this poorly soluble drug is successfully incorporated into ILs–nanoparticles hybrid systems, allowing controlled drug delivery.